The first challenge we were given at Stamp Camp was a Mystery Challenge. We were given a paper bag with the mystery items inside which we had to create something with. We didn’t have to use everything just so long as we used something.

This is what I came up with.

The main image has also been stamped randomly over the Pink Pirouette cardstock using Versamark ink but I’m not sure you can see it in the picture.

These are not colours I would normally grab to use together but I don’t think it turned out too bad. Remember I had limited stamp sets on hand and even though Marelle had quiet a few of hers there I was trying to use what I took.

When packing for camp I tried to restrict myself so I didn’t end up returning home with lots of things I needn’t have taken as I didn’t use them. I’m happy to report that the only thing I could of taken less of was ribbons but seeing how I only packed about 6 – 8 it really wasn’t a lot of space anyway. You know what would have happened if I didn’t have them though……. I would have needed them. 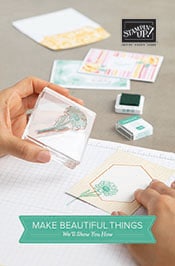